Its important that your baby’s sleeping area is safe. After all, your newborn will be spending 16 to 18 hours a day sleeping there in the first most fragile months of their life .

Can Cots Really be Dangerous?

It may surprise you to discover that the crib/cot is the most dangerous area in a baby's nursery. According to Consumer Product Safety Commission (CPSP) report, cribs account for more deaths of infants than any other nursery item. In fact, old-fashioned cots were described by the The U.S. CPSC as one of their ”Most Wanted” dangerous products.

After a string of fatalities and injuries caused by cots, and the recall of 4 million cots across the US, the CPSC created a set of mandatory cot safety standards that came into effect in 2011 .

Some of the new standards include tougher testing, stronger hardware, sturdier slats and better mattress supports.

Sadly, a similar set of standards have not been implemented in South Africa and although some manufacturers are working towards standards established in the UK or Australia, many more are imported with no regard to these updated safety standards

So what should parents look for when buying a cot for their newborn?

Drop side cots, which allow parents to lower one side of the cot for easier access, were banned in the US by the CPSC altogether in 2011 after it was found that they were responsible for 150 suffocation and strangulation deaths between 2007 to 2010. Why were drop side cots banned?

The issues identified in drops-side cots are:

2. Make sure the slats and corner posts of a cot are not more than 6cm apart

Check that the slats of the cot are no more than 6cm apart. This prevents the dangerous situation of an infant getting stuck between the slats.

Wider slats can allow an infant's legs and body to fall through the slats while the babies heads remains entrapped. This can lead to suffocation and death. A good way to test this is to try to a coke can between the slats. If it passes through the slats, they are too wide.

3. Avoid using a cot that is more than 10 years old

You might love that cute antique hand me down cot, but before putting your baby in it, it’s worth noting that since the first safety standards were developed in 1973 infant deaths in cribs have declined from 200 death a year to well under 50 a year. In 2011 the laws that governed cot design and manufacture were updated. Although South Africa has not adopted these new safer standards, many manufacturers in Europe and the USA use these standard in all the cribs that they manufacture.

If safety is your highest priority it’s always best to go with a cot that meets that latest safety standards.

For European cots check that they conform to the European Standard EN716-1:2008

For American crib check that they conform to ASTM F1169-13

4. Check that there are no cutouts in the head or footboards

Cutout areas in the head board or foot board can pose a strangulation risk if your babies head were to get stuck.

5. Check that the cot does not have decorative knobs on corner posts

Do not use a cot that has decorative knobs on corner posts as this may pose a strangulation hazard. Infants have been found strangled by their own clothing after catching their clothing on the corner post of a cot.

If the cot has knobs, the knobs should be unscrewed or sawed off flush with the headboard or footboard. Sand off splinters and sharp corners.

6. The cot mattress is firm and fits the cot snuggly

Choosing a cot mattress is as important as choosing the cot itself. Make sure that the mattress fits properly in your chosen cot without gaps that could pose a danger to your baby.

Larger gaps between the mattress and the cot can create a trap where an infant can get stuck, which poses a significant suffocation risk.

The cot mattresses must also not exceed 15 centimeters in height when measured from seam to seam. This helps to ensure that the baby cannot climb out of their cot as they grow.

The mattress must also be firm. A soft mattress can conform to  the shape of your babies head and face. This can create a pocket or indentation which increases the risk of suffocation and SIDS. There are two types of cot mattress; foam and innerspring. Both types can provide excellent support for infants and will keep their shape well if they are of a reasonable quality.

To test a foam cot mattress, press the mattress in the center and at the edges. It should snap back quickly and should not keep the shape of your hand. Try choose a mattress that is has a high foam density, is heavy and firm.

7.  Check that the cot is correctly installed and has no missing, loose or broken parts

Cots that have missing or broken pieces, and cots that have been assembled incorrectly, can result in entrapment and suffocation. Infants have been strangled when their head and neck became entrapped in the gaps created by missing, loose or broken parts.

Once you have chosen the perfect cot for your baby, there are still a number of considerations before you leave your little one alone in their cot to sleep.

Positioning of the cot

The latest American Academy of Pediatrics report on SIDS and sleep related infant deaths recommends that infants sleep in the parents' room close to the parents bed ideally for the first year of a babies life but at least for the first 6 months.

The evidence suggests that sleeping in the parents room but on a seperate surface decreases the risk of SIDS by up to 50%.

This means that the Ideal position for a crib is in the parents room for the early stages of a babies life.

Once you choose to move the cot to the nursery, you should make sure that you place the cot away from anything that might pose a strangulation risk. It’s best to keep it away from window curtains, blind cords and baby monitor cords.

Can mobiles be dangerous? Most mobiles have strings and small parts that can pose a suffocation and choke risk for babies. Once your baby is able to push themselves onto their hands and knees (usually 5 or 6 months) pack them away or ensure they are well out of reach.

Swallowing a small part or getting entangled in a mobile's strings can lead to suffocation or choking.

Should my baby sleep with a blanket and pillow?

According to the American academy of Paediatrics, soft bedding in a cot increases the risk of suffocation. This includes soft toys, blankets and pillows.

Instead of covering your baby with a blanket, dress them in a baby sleeping sack/bag.

Once your baby is able to roll over and has the dexterity and strength to move blankets around, you can add a blanket to the crib. This is usually around 12 months of age. It is still not recommended that you give your baby a pillow rather wait until they transition out of the cot and into a real bed.

Babies need to stay warm while they are sleeping, but loose bedding, pillows and blankets increase the chances of an infant suffocating in their cot. One way to keep your baby safe and warm is to use a sleeping bag/ sack.

Sleeping sacks remove the risk of suffocation by preventing any fabric from covering your babies face and airways which can make it more difficult for a baby to breathe.

Cot bumpers are not recommended. Instead of reducing dangers, cot bumpers actually introduce safety risks for your little one.

When babies learn to roll (between 4 and 6 months), they are at risk of rolling face first into a bumper which may cause them to suffocate.

The ribbons and ties on bumper also pose a strangulation risk.

What’s more, the problems that bumper were created to solve have mostly been resolved. Newer cribs are designed with bars that are closer together and the risk of a baby getting their head stuck between the cribs bars is largely solved.

In fact, the Canadian Paediatric Society have warned against using crib bumpers after studies linked them to a number of infant deaths and the American Academy of Paediatrics say that they “have no place in a safe sleep environment.”

If you decide to go against the AAP’s recommendations, rather avoid the padded ones and go instead for newer thin breathable ones and make sure that the bumper fits tightly around all sides of your crib.

Toddlers often use bumpers as a step to escape their cot so be sure to remove the bumper from the cot once your baby has learned to stand.

Is it safe to use wedges to elevate my baby off their mattress?

Contrary to popular belief, putting babies to sleep flat on their backs does not increase the risk of choking and aspiration.

According to the latest American Academy of Pediatrics report on SIDS and sleep related infant deaths:

sleep position does not increase the risk of choking and aspiration in infants, even those with gastroesophageal reflux, because infants have airway anatomy and mechanisms that protect against aspiration.

by American Academy of Pediatrics

it also states that:

the risk of SIDS outweighs the benefit of prone or lateral sleep position.

by American Academy of Pediatrics

How to place you baby in the crib

When you put your sleeping newborn in their cot, ensure that they are lying flat on their back in a horizontal position. Side sleeping is not safe or advised by the American Academy of Pediatrics.

You should also avoid over bundling and covering of the face and head of a new born. Overheating has been shown to increase the chances of SIDS.

Is it safe for my baby to sleep with a dummy?

Studies have reported a protective effect of dummy in the incidence of SIDS. Research shows that babies who sleep while sucking on a dummy have a significantly decreased risk of SIDS—anywhere from 50 per cent to 90 per cent.

Surprisingly, the protective effect of the dummy is even seen when the dummy falls out of the infant’s mouth.

Be sure that you should never attach a dummy clip to an infants clothing however (it’s a strangulation risk) and sleeping, unmonitored babies should not use dummies with “objects such as stuffed toys” attached to them.

When should I lower my baby's cot?

Once your baby has learned how to sit up, which normally happens between 5 and 8 months of age, you should lower your baby's cot by one notch.

When your baby has learned how to stand and can pull up on their own, you should lower the cot to its lowest level to prevent your baby from falling out.

How to ensure your cot remains safe

It is important to perform regular cot maintenance to ensure that your cot remains safe at all times. A number of tragic infant deaths have been caused by cots that have become damaged or assembled incorrectly.

Here is a list of checks to perform to ensure your crib remains safe: 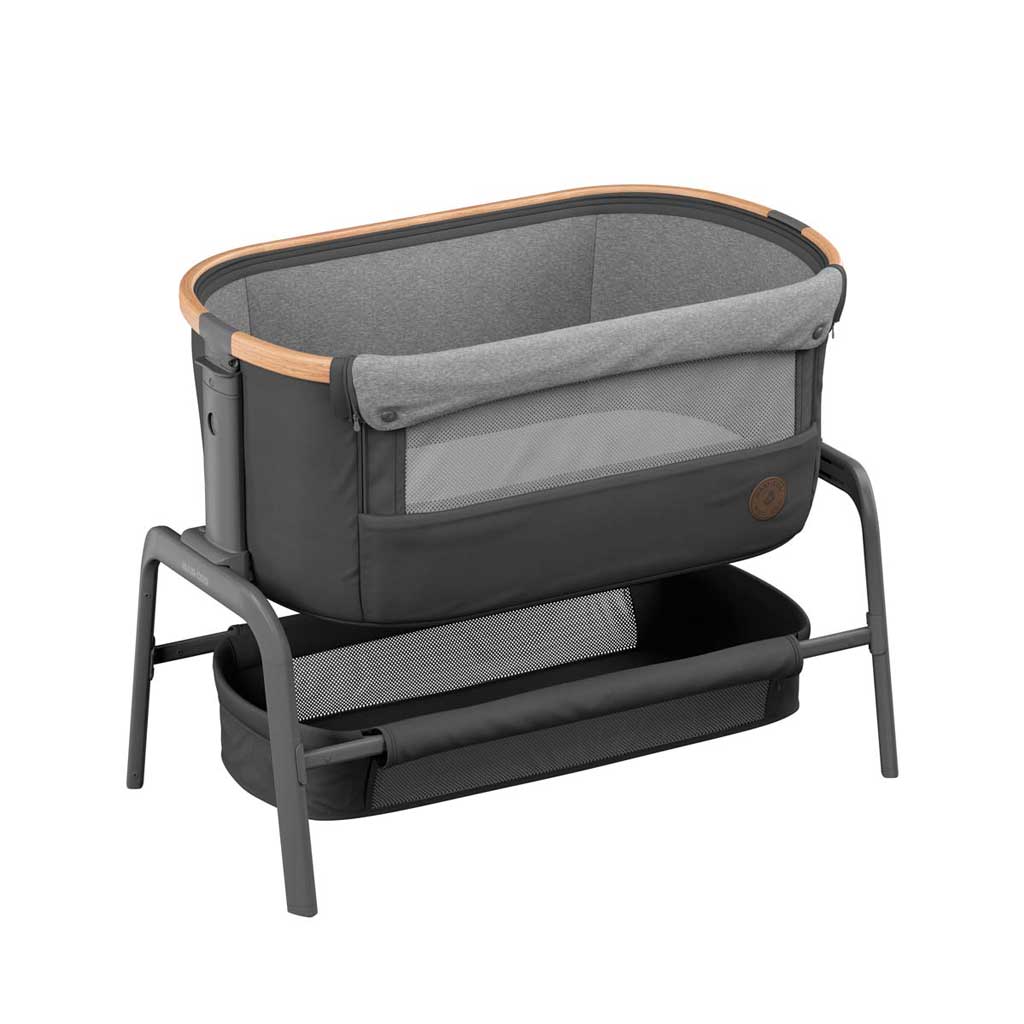 Approved from birth to 9kg 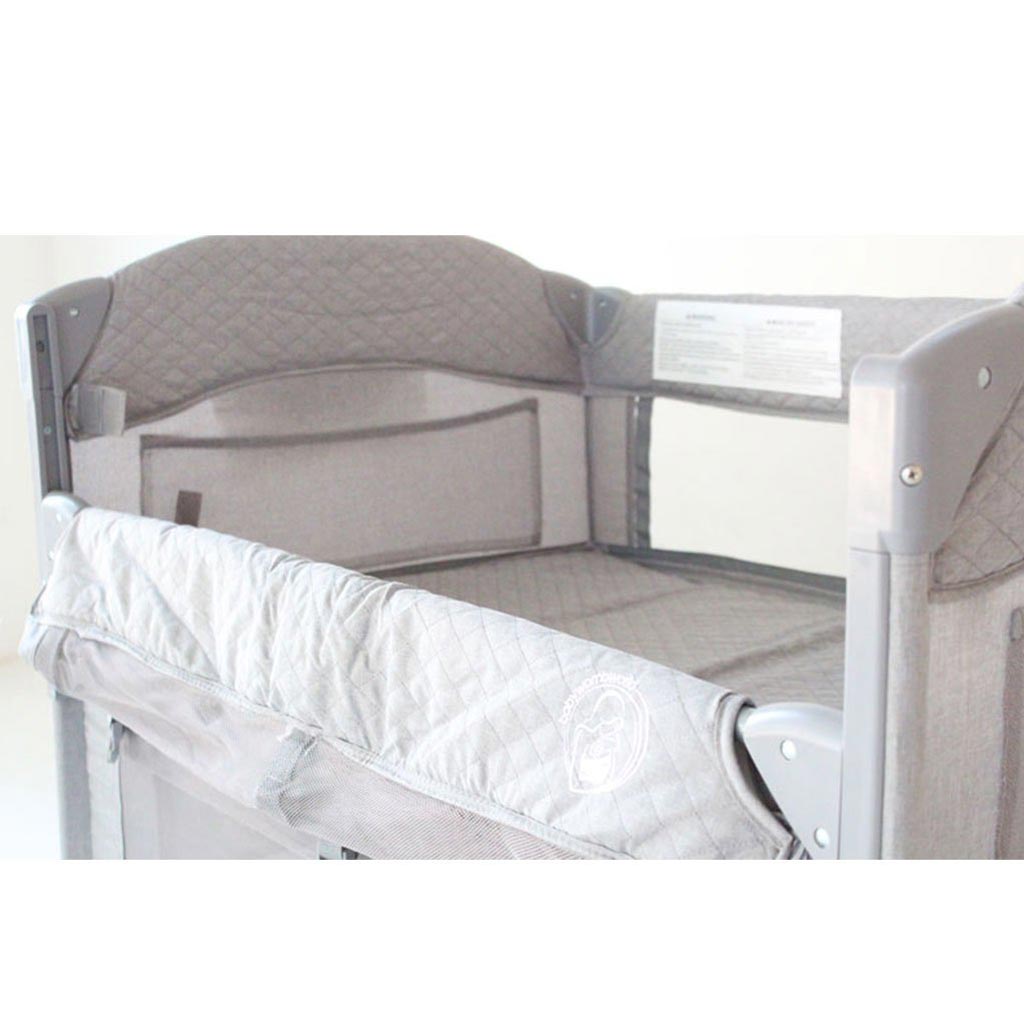 Co-sleeper from birth to 7kg/when baby starts rolling. Then converts to a camp cot 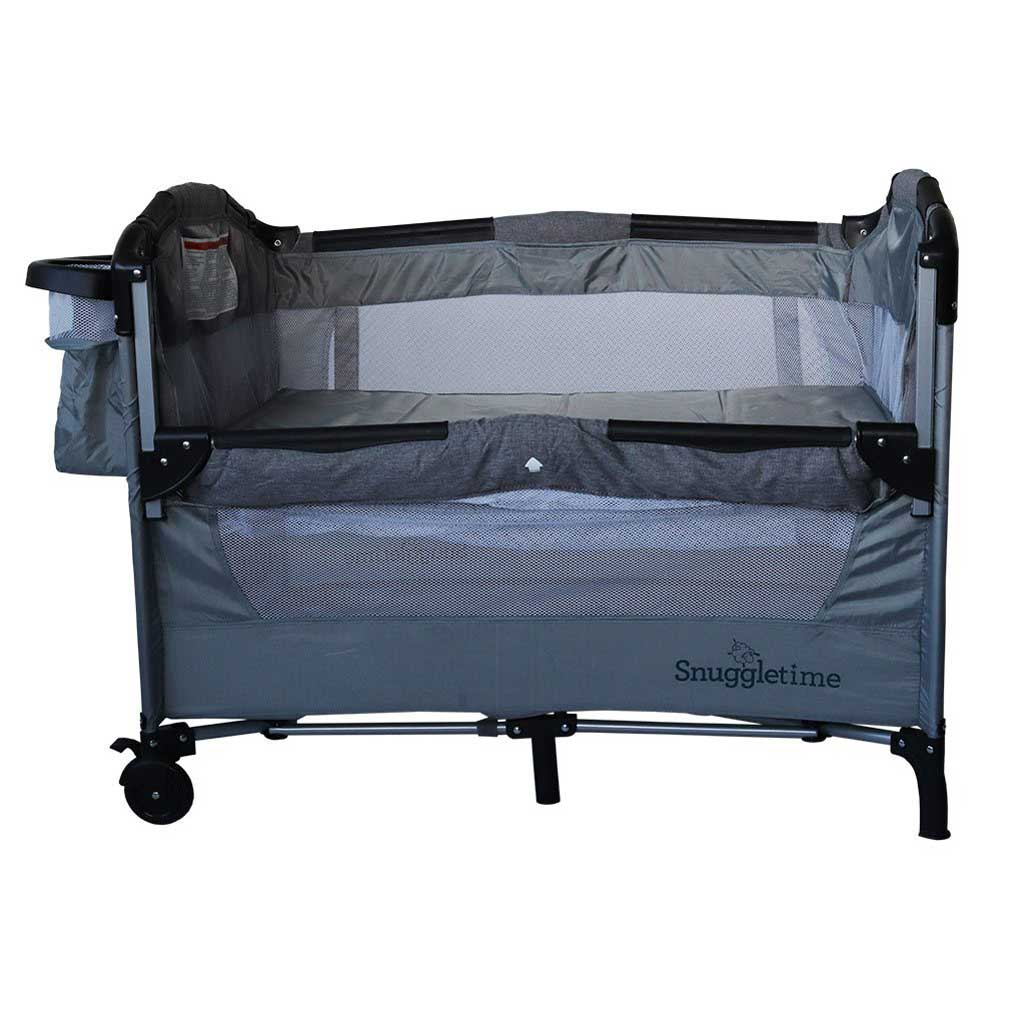 Snuggletime
Co-sleeper from birth to 7kg/when baby starts rolling. Then converts to a camp cot